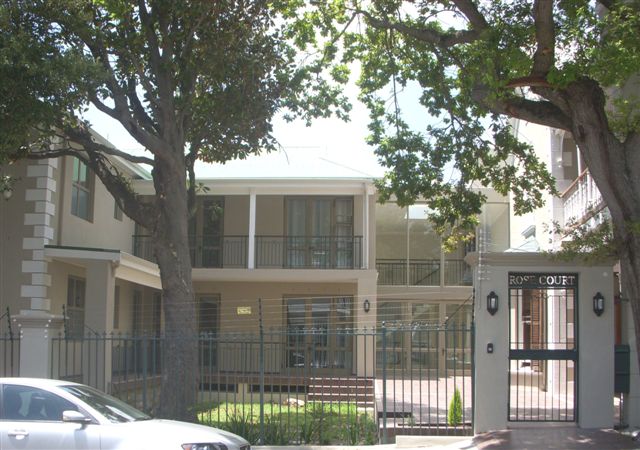 Our residents have the opportunity to develop independence, life skills and to enjoy social contact with their peers. This “home from home” offers them a place to experience the joy of living in a caring, nurturing and beautiful environment, and adds value to their daily lives. The homes are kosher and the residents get to celebrate all the festive holidays. 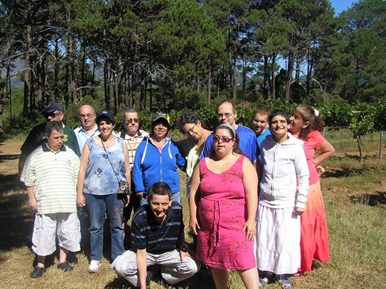 Astra Centre was closed for the day as the Rosecourt residents got to enjoy their team building event of grape picking in Constantia and a beautiful visit to Wynberg Park. The Glendale residents joined in the fun which was followed by lunch and socializing. To learn more about Astra Centre and all that they offer click here.

TURNING TABLES ON DISABILITY Brent Meersman
People with mental illness and disability – or as current politically correct speech has it, the intellectually challenged – suffer an enormous amount of discrimination and isolation. Broader society is impatient, defensive, usually awkward, and often hostile if not openly vindictive towards them. Meanwhile 99% of what irks the world is perpetrated by those ostensibly of sound mind.
Fortunately, under our constitution, people with special needs qualify for “disability grants” (over one million South Africans currently receive permanent disability grants). But that doesn’t change the need for a sense of self-worth, to enjoy meaningful work, to have at once some independence and yet the feeling that one belongs to society.
20 Breda Street is an old mansion. It was a hostel for young women and home to some of the Jewish refugees who came on the S.S. Stuttgart in October 1936. The house has remained to serve the Jewish community and today it houses the workshops for Astra, a sheltered employment centre. Started in 1950 with one person, there are now 65 people working here, all with special needs.
Director Merle Furman took me on a tour. Upstairs and downstairs there are various work rooms, one with several magnificently old wooden looms, still in use, producing quality work. A soft baby blanket is in the making according to pattern and design by its operator. There are sewing rooms, rag doll manufacturing and a carpentry shop making doll houses. One fellow collects stamps from envelopes to sell to philatelist dealers for the centre. I notice a page of six-cent Ugandan stamps with George the Fifth’s head on them.
All the manufactured items are available in a spacious gift shop.
There is also a restaurant café open to the public. Renovated and reopened in March last year, it is now housed in a solarium with views of Table Mountain and Lion’s Head. Glass panel walls can slide open in summer and there is an outside table too. It’s an airy, comfortable space. Twice a day, a dear called Margaret Catzel plays the piano.
There is no signage on the street, just look for number 20.
The waiters greet you and introduce themselves. As several struggle with writing, the menu is accompanied by a pen and a form on which you fill in your own order. I found the interactions virtually normal and perfectly relaxed. One also had the gratifying thought of how the tables are turned here – since some of the waiters would probably be less enthusiastically welcomed in return if they went as patrons to certain restaurants in this city. Destigmatization and breeding familiarity is an important function of this kind of establishment.
The kitchen is kosher and all items are milchik, in practice it’s vegetarian, though there is tuna lasagna and smoked salmon bagels. (The chef overseeing the kitchen is fully qualified.)
Breakfasts are the normal options (no bacon of course): muesli, yoghurt and stewed fruit compote or omelet's, scrambled and fried eggs with tomato and toast. For light meals there are sandwiches, salads, baked potatoes; and then there is a soup, quiche, and pasta of the day. The thick, traditional butternut broth I tried was quite fortifying.
The restaurant kitchen also does outside catering, providing large foil containers serving eight persons by pre-order. Prices are reasonable.
I doubt there is anything else like it in the world!!!
COFFEE TIME at 20 Breda Street, Gardens. Tel. 021 461-8414. Open for breakfast (served all day), teas and light lunches. Monday to Thursday 8am to 3.45pm, Friday 8am to 3pm. Booking essential. 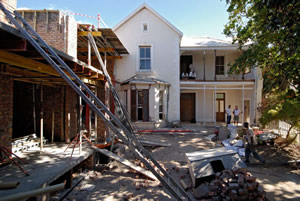 The third house, Rosecourt Terrace, which was opened in March 2010, with the new residents "phased" in, to allow them the opportunity to settle in, with individual attention. These residents are all young people, leaving their family homes for the first time. They have the support of our consultant clinical psychologist, our resident social worker, as well as the house mother. The parents have also been offered support in the process of separation. 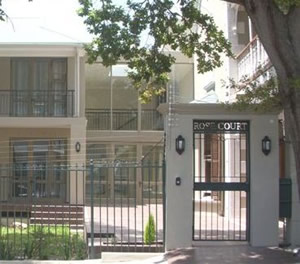 The excitement is tangible, as this young group move into the most stunning accommodation imaginable. Each has their own room and bathroom, the building is brand new, having been completed at the end of 2009.