“We are a group of  South Africans living in the United States deeply concerned about the needs of the elderly, physically and mentally challenged, mentally ill and Children in need, living in residential homes in Southern Africa. We are committed to the values of our heritage of taking care of our own.”

In 2000 a volunteer group of South Africans from San Diego, initiated an international program called ChaiSouthAfrica. They have since raised millions of Rands from donors throughout the USA and Canada for Jewish Institutions in Southern Africa.

The Founders, Charles Jaffe, Claire Ellman and David and Felicia Mandelbaum, created the organization that has become internationally recognized. 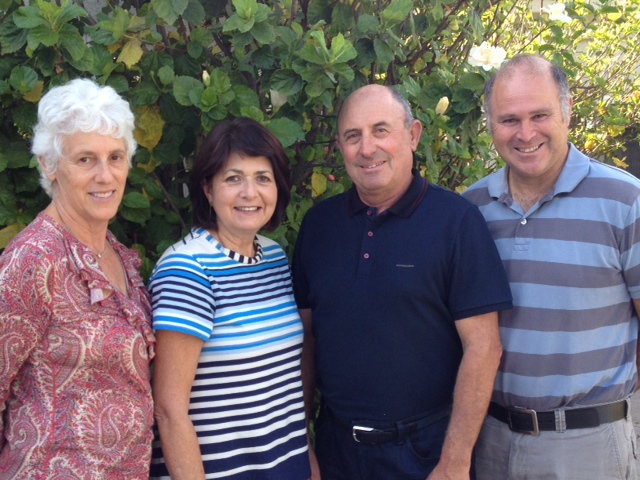 For many generations, Jews thrived in South Africa. The community at its peak was 120,000 members strong. Jewish South Africans had tremendous success in the country and built a traditional community filled with day schools, synagogues, community centers and homes for the aging. But political instability and violent civil unrest sent thousands of Jewish South Africans packing for safer ground. “It was not easy to leave our homes and community,” says Claire Ellman.

Many Jewish South Africans chose to settle in sunny San Diego, which reminded them of the temperate weather they were used to back home. The community started over, planted roots and has thrived in the last few decades. But no one forgot about the loved ones and community members still in South Africa.

“Many of us left family and friends behind,” says David Mandelbaum. “I think as an immigrant you never really forget where you came from and you always feel a strong bond to your birthplace.”

The Jewish South Africa they left behind looked very different after more than half of the community was gone. By 2000, many of the homes for the elderly and disabled were in disrepair. Facilities needed serious renovations to maintain a high level of quality for the Jewish seniors and disabled who remained. The community was not as strong and had difficulty raising all the funds needed maintain Jewish facilities over the long term.

“My family and many others had helped build these institutions,” says Claire. “We were not going to stand idly by and let them fall apart.”

“Our family and friends needed the Jewish infrastructure to be maintained even in our absence,” says Charles Jaffe. Claire, Charles, and David and Felicia Mandelbaum were determined to help. Together they helped found ChaiSouthAfrica, a fund, that former South African Jews could contribute to, to assist friends and family in need back home.

“The fund took off,” says Charles. “We needed an organization that could help us manage the fund day to day in a professional manner. We, of course, turned to the Jewish Community Foundation.”

The founders of ChaiSouthAfrica say it was an excellent decision. The fund today attracts contributions from across the United States and Canada, and has granted over $4 million or 40 million South African Rand, to help Jewish aged, mentally and physically challenged and children in need. ChaiSouthAfrica reaches more than 1,400 individuals in 13 different institutions throughout Southern Africa annually.

“It is a great success story,” says Felicia. “When we started, we never imagined how many people’s lives we would improve. It is very important to us that we can still give back to our birthplace in such a significant way.

ChaiSouthAfrica is currently one of the major donors to all the following homes in Southern Africa:

ChaiSouthAfrica is a donor advised fund of the Jewish Community Foundation of San Diego (JCF), a 501(c)(3) nonprofit organization, recognized by the IRS as a public charity. Contributions to ChaiSouthAfrica are tax-deductible to the full extent provided by law. Gifts of appreciated stock can be easily facilitated and may provide significant tax advantages. The JCF works with individuals, families and organizations to promote philanthropy and enrich the community and the world.

Our e-card is a quick, convenient and meaningful way to let others, locally and overseas know you are thinking of them.

Send a personalized message in honor or in memory of someone, for a hostess, Bar or Bat Mitzvah, birthday or anniversary gift. Click here to get started and support ChaiSouthAfrica.

We invite you to join us in our efforts, and would certainly appreciate your help throughout the year, it’s a wonderful way to do a mitzvah! We need volunteers for Phonathons, administrative support, marketing and social networking. Bring your family and friends, students get community volunteer hours.